Ekushey Boi Mela 2022. Bangla academy Boi Mela has reviled by Prime Minister Sheik Hasina on 15 February 2022. Here we will update the new Booklist daily Ekushey Book Fair 2022. Channel I will live telecast this Boi Mela every day from 11 AM to 09 pm during the book fair. Here will be introducing new books every day, ‘Boi Mela Pratidin’ will also air interviews of writers, viewers, and visitors during the program.

That is to say, Prime Minister Sheikh Hasina has inaugurated this year’s Amar Ekushey Book Fair with the theme ‘Father of the Nation Bangabandhu Sheikh Mujibur Rahman’s birth centenary and the golden jubilee of independence. Putting an end to various speculations, the Ekushey Book Fair, the fair of Bengali life, started from today.

In the afternoon, Prime Minister Sheikh Hasina inaugurated the book fair by virtually connecting from Ganobhaban on the main stage of Bangla Academy premises. At this time he unveiled the cover of NEW CHINA 1952, the English translation of Bangabandhu’s book ‘Amar Dekha Nayachin’. 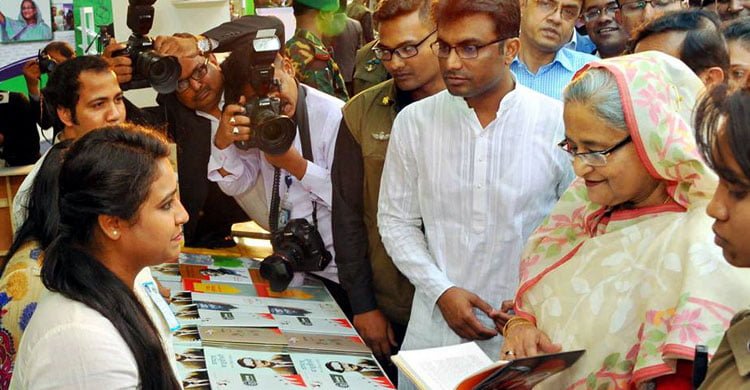 This year’s book fair covers a total area of ​​1.5 million square feet. 540 publishing houses took part. In the reality of the Corona period, hygiene is getting the highest priority in this year’s book fair. Mask wear has been made compulsory for those who come to the fair. The 14-day fair will end on 28 February. The fair will be open every day from 11 am to 9 pm. It will be open on Fridays and Saturdays from 11 a.m. to 9 p.m.

The names of 41 new books were submitted on Thursday. In addition, seven books have been unwrapped. Prothom Alo editor Matiur Rahman’s first two books – Ekla Manush Kabari and Runa Laila across the border.

The Iranian tale of Ira Aftab Hossain has brought tradition. The ghost of the printing press has brought a book about Soumitra Chatterjee by Sajjad Hussain. Harishankar Jaldas’s essay brings to the fore the roots of apartheid.

However, 154 out of 107 institutions in the academy premises and 680 units in 433 institutions in the Suhrawardy Udyan section; A total of 834 units have been allotted to 540 institutions. There are 33 pavilions at the fair. The Little Magazine premises have been set up in the main fairgrounds of the park. There, 135 LittleMags have allotted stalls as well as 140 stalls with five open stalls.

Therefore, Shishu Chattar is also in the Suhrawardy Udyan part of the fair. Arrangements have made to sell and display the books of those who have published books on the initiative of a single small publishing house and individual at the stall of the National Library.

Arrangements have made for the unveiling ceremony of the new book at Suhrawardy Udyan. The seminar will hold on the main stage of the book fair every day from 15 February to 28 February 2022. If Corona’s condition goes well then time will be increased.

After that, Ekushey Boi Mela 2022 has started on 14 February but it will shout on any day. Due to the Coronavirus pandemic, this Bookfair did not start in February. There are more books that came in Fair on the first day. Including Primer Minister of Bangladesh total of six politician books came in Fair. Besides Munsi Mohammad Ubaidullah’s four books, Mir Abdul Awal’s book “Padma Parer Manush”, Anwar Hossain Monju’s 15 books are Translated books.

Certainly, we will try to update all the information about Ekushey Book Fair 2022. All the news, new book information, writer introducing and others important things.

As you know Google Street View will show all the pavilion or Stall of your favorite publications. So if you do not find out about our publication stall then take the help of Google Map.

Stall 776 at the fair this time

This time a total of 534 companies have been allotted 776 unit stalls in the fair. There are 142 stalls for 102 institutions in the academy premises. 634 stalls have been given to 432 institutions in Suhrawardy Udyan. There are 35 pavilions. The pavilions have been spread throughout the fair in the garden part. Last year the pavilion was criticized for being just in front of the Independence Monument.

However, Authorities have allotted a total of 663 units – 114 at the Bangla Academy ground to 80 organizations and 549 at Suhrawardy Udyan to 329 organizations. Besides, 15 pavilions have been allocated for 14 publishing houses, including Bangla Academy. There will be strict security arrangements in and around the book fair venue to avert any unpleasant incident during the fair.