BCB President Nazmul Hassan Papan unveiled the logo of the special edition of BPL in a flickering ceremony at a hotel in the capital on Saturday. The same day the new names of the seven teams participating in the tournament were released. Bangabandhu BPL today player draft. Live BPL 2019 Player Draft, BPL 7 All Team Squad, Price List. Who is the highest-paid player? BPL kon dole ke khelbe 2020.

The player draft for the Bangabandhu BPL T20 will be held tomorrow (Sunday, 17 November) at the Grand Ball Room, Radisson Blu Water Garden Dhaka. The draft program starts at 18:00 BST. There, these teams will team up with players of their choice. The draft includes 181 Bangladeshi cricketers and 439 foreign cricketers.

Mashrafee bin Murtaza, Mushfiqur Rahim, Tamim Iqbal and Mahmudullah Riyad have been included in the ‘A-Plus’ category among the domestic cricketers. The salary for this category is Tk 50 lac. Whereas foreign cricketers will get 85 lac.

In the ‘A’ category are Soumya Sarkar, Mustafizur Rahman, Mominul Haque, Imrul Kayes, Mosaddek Hossain, Liton Das, Taizul Islam, Mohammad Mithun, and Mehdi Hasan Miraj. Their remuneration is Tk 25 lac. Besides, BCB has set different prices in these four categories from ‘B’ to ‘E’.

Prime Minister Sheikh Hasina will inaugurate BPL 7 on December 8, 2019. And the opening match will be played on 11 December 2019.

On this side, there are 181 Bangladeshi cricketers and 439 foreign cricketers in the draft. England is the most overseas cricketer. In addition to 95 cricketers from England, 89 from Pakistan, 66 from West Indies, Sri Lanka, Afghanistan, Australia, Nepal, and New Zealand have been selected for cricketers from different countries. More on Wikipedia.

Those who list the ‘A-Plus’ list of foreign categories will get $ 1 million. Then the players of the ‘A’ category have been priced at $ 5,000. Overseas cricketers include Mohammad Amir of Pakistan, Shahid Afridi and Chris Gayle, many of the world’s leading cricketers.

The rest of the players are in Category C, D, and E. 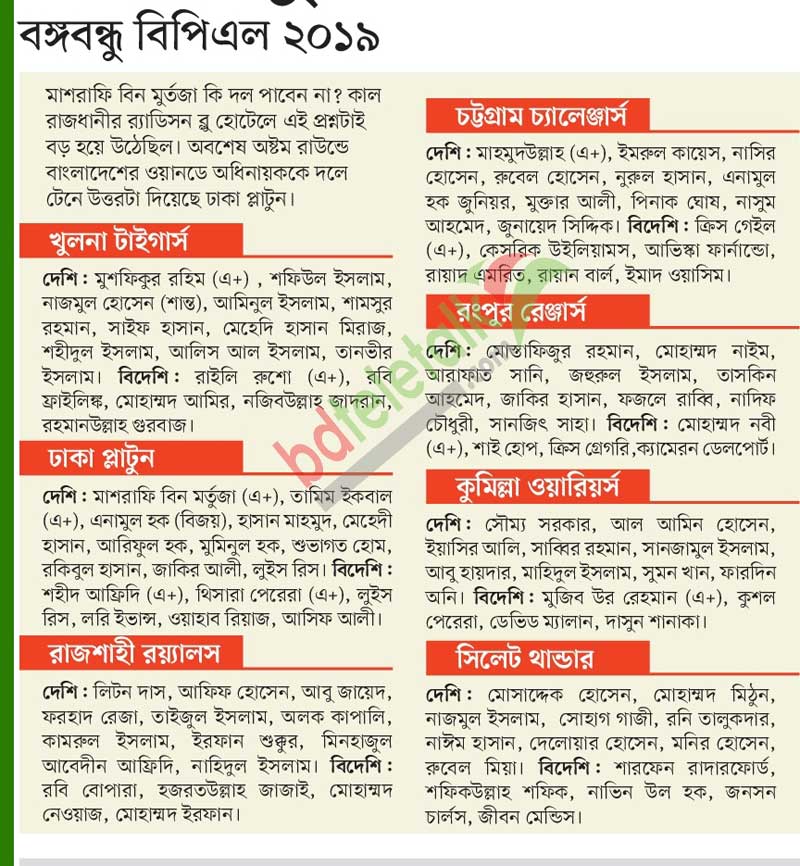