Also, the Band team sang the theme song. This year in BPL, there is no Opening Ceremony. For that, there is no new theme song for BPL 2022. Last year’s BPL theme song will as this season 8. BPL 9 theme song was sang by Kumar Biswajit, Konal, Liza and Tasnova. 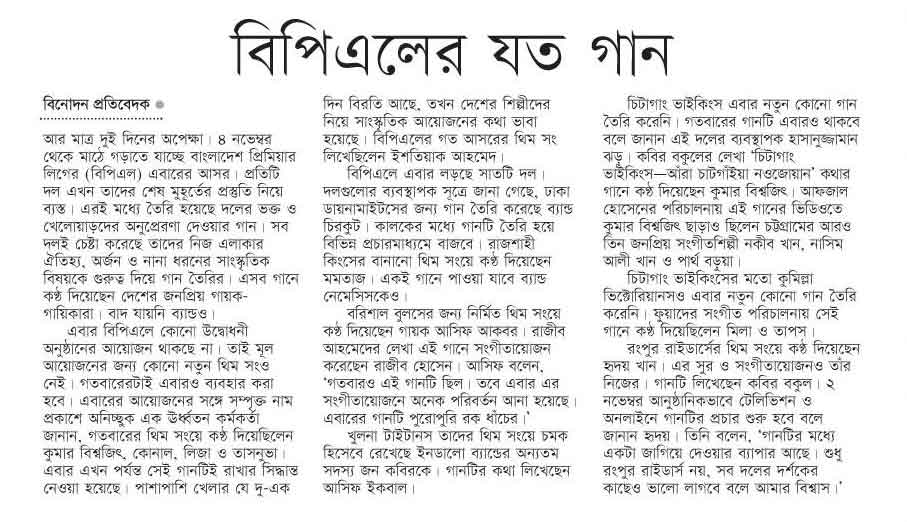 BPL T20 2022 will play among seven teams. According to the news of the Manager of the seven franchises, all teams have completed their theme song. Bellow, you have to see the team-wise theme song. Singer name, Writer, composition, and music video.

Band Cirkut has made a theme song for Dhaka Dynamites.

Asif Akber has sang the Barisal Bulls Theme song. The song was written by Rajib Ahmed. And Rajib Hossain has direction about composing and music. Asif said, last year also it was the Theme song of Barisal Bulls. But we have a huge change in the music composition. Now it is almost Rock style song.

Khulna Titans have made a surprise for their Theme song. Jhon Kabir, member of Indola Band has sang of Khulna Titans Theme Song. Asif Iqbal has written the theme song.

Chittagong Vikings did not make a new theme song for this season. Kabir Bakul was written the song. Kumar Biswajit was sang the Theme song as “Ara Chatgaya Naojuyan” title. Afzal Hossain has the direction of the music video. Another three popular singers of Chittagong Nakib Khan, Nasim Ali Khan, and Partho Baruya were in the theme song video.

Comilla Victorians also did not make a new theme song for BPL 2022. Their last season theme song will play in this season. Mila and Taposh have sung the Comilla Theme song. Fuad features that song was awesome.

Hridoy Khan has sang for Rangpur Riders Theme Song. Also, he has tuned and composition of this RR Theme song. Kabir Bakul was written the song. Hridoy Khan said we hoped that not only the fan of Rangpur Riders also all the fans of Cricket will love this song.