BCB XI won their first warm up match against Sydney Sixers by 7 wickets on 14 December 2016. Mahamudhulla and Musfiqur Rahim ton the very high score. Somuy Sarkar shown extra ordinary performance in the Ball. He took 3 wicket in the last over by 7 runs. With the bat he tons 20 runs from 9 balls. Just right time he knocked his form.

Toss Result : BCB XI have won the toss and elected to bat first in the practice match against Sydney Thunder.

Live Score (Refresh every 30 Sec): All over! Thunder secure a dominant six-wicket win over in front of a vocal crowd at Spotless Stadium

Five overs to play, we need 26 runs to win

FOUR! Glorious cover drive to the rope from Nair Thunder 4-96

Wicket !! 4/80. Blizzard chops on, and a short but entertaining knock ends Thunder 4-80

Wicket. Doran looks to go big but is caught on the rope. Thunder 3-60 Bliz the new bat

FOUR! Gibbo crunches one to the leg side boundary Thunder need 66 from 71 to win

Lenton hit on the shoulder, it deflects to the rope but he’s in a bit of pain We’re 0-47

Another four to finish the over, and Gibson’s BPL stocks continue to rise Thunder 0-35

SIX! Lenton with a lovely shot down the ground He moves to 17, Thunder 0-21 after four over.

Handy first over for the Thunder is at 0-9.

We’re back live here at Spotless, Thunder need 123 to win, Lenton and Gibson to open 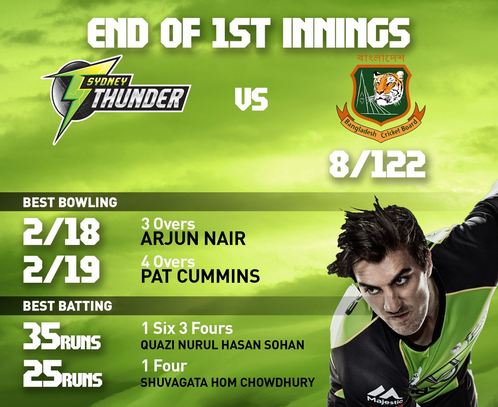 Run Out! Confusion and Sandhu removes the bails BCB XI 8/117.

WHAT A SHOT! Nurul ramps Sandhu for six and the score is 7/103

After two rockets from Cummins, Shuvagata decides to change his bat

Six off the over and BCB XI 6/69 after 14. Pat Cummins back into the attack

BCB XI are 6/63 after 13, Fawad to continue from the Martin and Angus Stand End

Captain Morgan rotating his spinners, Ahmed back into the attack. 50/6 after 11 overs

Nair continues with Bangladesh 5-46 at the half way point

Dropped 41/5 after 9 over completed

Mominul is the new man

\WICKET! An absolute beauty as Nair bowls Mosaddek for 13

Mosaddek takes on Ahmed and gets 11 from that over. Nair into the attack

Four ! by Musaddek. back to back

Four from Green’s first over, Ahmed to bowl from the other end

Shuvagata is the new man in. BCB XI 21/4 after 6 over. Chris Green into the attack