Bangladesh Cricket Board BCB announced a 14-member Bangladesh Test team squad for the Rawalpindi Test. Four left-handed batsmen in the squad. The left-hander, along with spinner Taizul Islam, are five. The team is more likely to think of themselves as a place of power than what their opponents think. This is probably why four left-handed batsmen are in the selectors’ squad.

In the meantime, Soumya Sarkar has been called up to the Test squad after the only test against Afghanistan in September at home. Tamim Iqbal, who made the ‘double century’ in Bangladesh Cricket League today, was the ‘automatic choice’. Today, Mominul Haque, who has taken a century as his partner, is usually led by the Test team. The fourth left-arm batsman Nazmul Hossain is calm. He played his last Test for the country against Sylhet in November 2018 against Zimbabwe.

Bangladesh team played the latest Test series against India last November. Pacers Mostafizur Rahman and Mosaddek Hossain have been dropped from the squad. Mostafiz’s fitness is an issue in itself. In addition to the rumors at the cricket ground – coach Russell Domingo liked him more as a white ball game bowler. And Mustafiz himself has a fear of the test. Mostafiz was not even in Bangladesh’s last Test squad at the Eden Gardens in India. Openers Sadman Islam, Imrul Kayes, and Mehdi Hasan Miraj have been dropped from the Kolkata Test team. Mosaddek along with these three cricketers are also in the spot. And Mushfiqur Rahim has already withdrawn his name from the Pakistan series.

The ‘expert’ batsmen in the squad are 8 – Tamim Iqbal, Mominul Haque, Saif Hassan, Nazmul Hossain, Mahmudullah, Mohammad Mithun, Liton Das, and Soumya Sarkar. Tamim and Mominul scored in the first match of the Bangladesh Cricket League (BCL). Tamim was able to prepare for the Rawalpindi Test in an unbeaten 222 at the Sher-e-Bangla Stadium in Mirpur today. Mominul’s batsman came in for 111 runs. Saif Hasan’s 58-run innings of 333-minute wicket showed good potential in Pakistan.

The right-handed opener is still waiting for a long time to bat in the national team. Tamim-Nazmul and Saif were the only five openers in the Test squad if they caught Soumya and Leighton. Leighton, however, did not run in the BCL. Mahmudullah’s visit to Pakistan will be an unbeaten companion, who could not play big innings in BCL. Ban vs Pak live telecast on Ten cricket and PTV Sports.

The Bangladesh team has four specialist pacers, while Medium pacer Saumya has five. Such a bowling attack, keeping Rawalpindi’s condition in mind. Among the pacers are Ibadat Hossain and Rubel Hossain. Abu Zaid has been taken into the squad keeping in mind the swing. Al-Amin is very good at bowling. Ibadat got two wickets in the current match for Northern in BCL.

In the absence of Shakib Al Hasan, the main responsibility for the spin will be on the shoulders of Taizul Islam. The left-arm spinner has made good preparations for the Eastern side with 5 wickets. He is accompanied by off-spinner Naeem Hassan. This is the ‘expert’ spin section of Bangladesh. 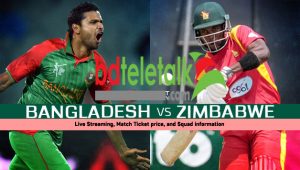 India U19 vs Bangladesh U19 Final Match Prediction, Previ...