Finally Bangladesh actress model Apu Biswas disclosed her hidden misty. She said today on a TV Channel live that Shakib Khan is my husband. And I gave birth a child (boy) at Kolkata in India.

She said, Shakib and I got married on 18 April 2008 at Shakib’s house. There were present both family nearest persons only. And it was very secret. I became Muslim and kept name “Apu Islam Khan”. Our marriage was by registry format. Kazi came from Faridpur.

When I got pregnant he said to me hide own self. I did. I was in Singapore, India and Bangkok. I have given delivery a baby boy 0n 27 September 2016 and his name is Abraham Khan Joy.

Apu Biswas was crying often when she is saying those words in live interview on News24 TV channel. Bellow you have to see the news in Bangla and Video with Apu Biswas sons picture. Live video Apu Biswas marriage and baby disclose story against Shakib Khan. 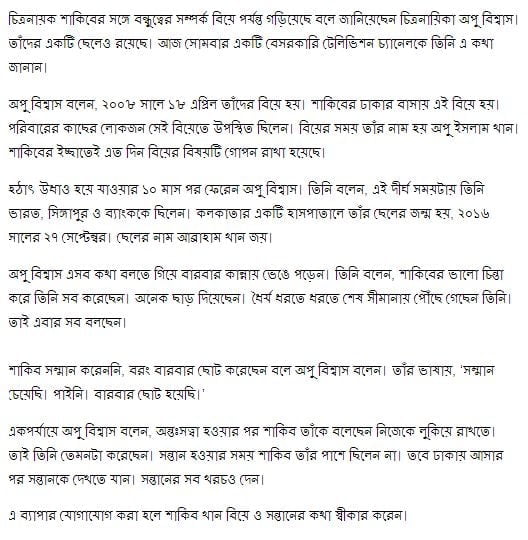 Before it a rummer was that, Bangladeshi actress Apu Biswas gets married today 14 December to Tanmoy Biswas at Community center in Dhaka. Finally the popular heroine of the film Apu Biswas abolished evidence of Shakib chapter, is going to get married. The marriage ceremony will be held a community center in Dhaka in the domestic environment. Her husband name is Tanmoy Biswas from Jessore.

Apu Biswas husband Tanmoy is an IT specialist. He is doing a job as IT Manager in a popular private company. Jitu Nota (actor of Shatta Movie) has disclosed this starling story on the media. Jitu Nota is the friend of Tanmoy Biswas.

Today 14 December, Wednesday Jitu Nota wrote on his Facebook wall with add a picture of Tanmoy and Apu Biswas, “Not Shakib, Tanmoy Biswas is going to marry to Apu. Tonight I will be at the party with both family member in Hotel of Dhaka.”

But after few times, he deleted his post from Facebook. Then Jagonews contact to Jitu, he said, “It is true that they are going to marry tonight.

Other source of Prothom Alo : Sapan Biswas (Uncle of Apu) said to Prothom Alo, it is a rummer. Nothing is happening like that. I am in Bogra. Just I heared about marry to you.

“Do you know Tanmoy?”, he said, no. I did not hear his name before. You know, before that a rummer was about Shakib Khan. Now another one. Apu Biwas is at Shiliguri in India with her mother.